Chuck Palahniuk Fans - what should I start with? 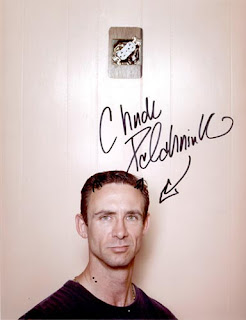 I have seen some great reviews and not so great on Chuck Palahniuk books since blogging. I definitely want to give him a try this year. Even the 1 star 2 star reviews peaked my interest because of the story or the emotion it left the blogger.

What Chuck book has been your favourite? Do you have a review you can share with me?

2) Rant - review by Jennifer: Reading with Tequila....... http://www.readingwithtequila.com/2010/03/rant-by-chuck-palahniuk.html
Another review by Kerri http://ravndahl.blogspot.com/2009/02/rant-oral-biography-of-buster-casey-by.html
I have my eye on these 2 also, but haven't seen any reviews from blogging friends

3) Haunted
"WRITER'S RETREAT: ABANDON YOUR LIFE FOR THREE MONTHS. Just disappear. Leave behind everything that keeps you from creating your masterpiece. Your job and family and home, all those obligations and distractions -- put them on hold for three months. Live with like-minded people in a setting that supports total immersion in your work. Food and lodging free for those who qualify. . . . Before it's too late, live the life you dream about. Spaces very limited."

4) Fight Club - review by Nina http://angeltyuan.blogspot.com/2009/11/review-fight-club-by-chuck-palahniuk.html
Featuring soap made from human fat, waiters at high-class restaurants who do unmentionable things to soup and an underground organization dedicated to inflicting a violent anarchy upon the land, Palahniuk's apocalyptic first novel is clearly not for the faint of heart. The unnamed (and extremely unreliable) narrator, who makes his living investigating accidents for a car company in order to assess their liability, is combating insomnia and a general sense of anomie by attending a steady series of support-group meetings for the grievously ill, at one of which (testicular cancer) he meets a young woman named Marla. She and the narrator get into a love triangle of sorts with Tyler Durden, a mysterious and gleefully destructive young man with whom the narrator starts a fight club, a secret society that offers young professionals the chance to beat one another to a bloody pulp. Mayhem ensues, beginning with the narrator's condo exploding and culminating with a terrorist attack on the world's tallest building. Writing in an ironic deadpan and including something to offend everyone, Palahniuk is a risky writer who takes chances galore, especially with a particularly bizarre plot twist he throws in late in the book. Caustic, outrageous, bleakly funny, violent and always unsettling, Palahniuk's utterly original creation will make even the most jaded reader sit up and take notice.


I appreciate any comments and or recommendations. I will also feature your review when I read and review it.