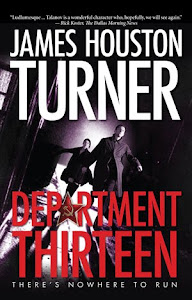 Department Thirteen - the assassination and sabotage unit of the KGB - never officially existed, but retired KGB colonel Aleksandr Talanov knows that it did. It’s but one of the many secrets he’s worked hard to forget. Now living in Australia, Talanov and dozens of dinner guests are suddenly the target of assassins. Talanov and his wife are mistakenly spared, but soon find themselves running for their lives, hunted by the killers, blamed by the police, increasingly pivotal to an invisible network of death about which they know nothing. But someone thinks they know. For in 1983, a second Department Thirteen was created, and Talanov discovers they have but one purpose: to kill him, whatever the cost.

So amazing, what a thrilling rush, non stop action, thought provoking and brilliant characters.  Talanov, the ex secret agent is my favourite character this year so far, love him.  He is like a cat, has 9 lives, this was my only complaint, one to many close calls during his run for life adventure or is it that he is just that good.

I have never read an espionage book that I can think of and thriller is my favourite genre, crazy right.  Well, this book had a great opening and did not let up until the last paragraph.  Talanov has became the target for assassins but he was a successful spy so he was trained by the best of the best and wasn't going to let him or his wife die without knowing why.  He was trained to protect and read people to know what was coming next.

There were many characters but they were all defined and added to the storyline, easy to keep track of.  Some were hardcore which included strong females which is always refreshing. I initially thought it would be to many but J Turner executed his characters perfectly.  Some were only known as code names, Three and Four, which added to the story as everything and everyone was a cover up.

I love how this story was so intricate, an onion, peeling away each clue, development, the past, who else will die and when, intense brilliance.

This is an unputdownable read for sure.  I found myself daydreaming and cheering for Talanov, when I wasn't reading and in my sleep.  I highly recommend this to all crime, mystery, thriller fans.  One of the best I have read in a long time.  If you enjoy movies like Mission Impossible, you will love this one.  Need a recommendation for the men in your life, this is it.

And the characters will make you want more and guess what..... James Turner will be giving us more this year September, the next is called Greco's Game.

I usually like to share favourite quotes but honestly this book just had so many memorable scenes it was hard to choose quotes.  I suggest you go read it.

My only concern is that there are unbelievable scenes and Talanov should have died but he knows his stuff and when assassins think they have the upper hand and then try to get information also, it all goes wrong, for them........