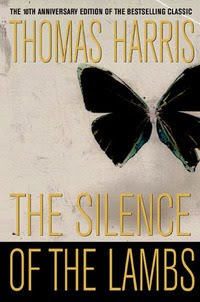 The NPR audience nominated some 600 novels to our "Killer Thrillers" poll and cast more than 17,000 ballots. to continue reading go here

The Winner: The Silence Of The Lambs by Thomas Harris beat out two other serial killer books -- The Girl with the Dragon Tattoo by Stieg Larsson and Kiss the Girls by James Patterson -- for the No. 1 spot.


Here is the List - I have watched a ton of the movies, I need to get to reading. Stephen King is my brothers favourite author so I have access to all those books to read.  There are a few I am not interested in though, eg. Dan Brown.

1. The Silence of the Lambs by Thomas Harris (My ultimate favourite movie) 4 1/2


2. The Girl with the Dragon Tattoo by Stieg Larsson

3. Kiss the Girls, by James Patterson

4. The Bourne Identity, by Robert Ludlum

5. In Cold Blood, by Truman Capote

7. The Shining, by Stephen King

8. And Then There Were None, by Agatha Christie 4

10. The Hound of the Baskervilles, by Sir Arthur Conan Doyle

13. The Bone Collector, by Jeffery Deaver  4

17. The Andromeda Strain, by Michael Crichton

19. The Day of the Jackal, by Frederick Forsyth

21. Eye of the Needle, by Ken Follett

23. The Count of Monte Cristo, by Alexandre Dumas

24. The Girl Who Played with Fire, by Stieg Larsson (DNF, not my cup of tea)

26. The Alienist, by Caleb Carr

29. The Maltese Falcon, by Dashiell Hammett

30. The Girl Who Kicked the Hornet's Nest, by Stieg Larsson

31. No Country For Old Men, by Cormac McCarthy

39. The Spy Who Came in from the Cold, by John Le Carre

40. The Poet, by Michael Connelly

41. The Boys from Brazil, by Ira Levin

43. The Bride Collector, by Ted Dekker

46. The Manchurian Candidate, by Richard Condon

50. Consent to Kill, by Vince Flynn

56. The Woman in White, by Wilkie Collins

59. The Killing Floor, by Lee Child

60. Rules of Prey, by John Sandford

70. What the Dead Know, by Laura Lippman

71. The Shadow of the Wind, by Carlos Ruiz Zafon

72. The Cabinet of Curiosities, by Douglas Preston and Lincoln Child

77. The Secret History, by Donna Tartt

80. The Brotherhood of the Rose, by David Morrell

84. The Last of the Mohicans, by James Fenimore Cooper

85. Six Days of the Condor, by James Grady

87. Strangers on a Train, by Patricia Highsmith

88. The Eight, by Katherine Neville

92. The Kill Artist, by Daniel Silva

94. The Club Dumas, by Arturo Perez-Reverte

96. The Monkey's Raincoat, by Robert Crais


So do you have any recommendations that you think I should add to my TBR list?  Go over to Stacy's Books to see her comments on the list, she recommends # 98.

Thanks for visiting Tea Time with Marce
Posted by Marce at 2:30 PM