Book Review - His & Hers by Alice Feeney 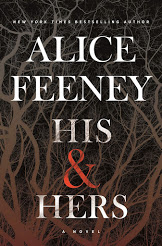 If there are two sides to every story, someone is always lying…

When a woman is murdered in Blackdown village, newsreader Anna Andrews is reluctant to cover the case. Anna’s ex-husband, DCI Jack Harper, is suspicious of her involvement, until he becomes a suspect in his own murder investigation.

Someone is lying, and some secrets are worth killing to keep.

Brilliant, just brilliant.  I loved that this author made me guess, 2nd guess, give up on guessing and guess again. I loved every moment of this book.  The author is so good at making you believe and make sense of what you are reading which takes the suspicion from one to another multiple times.  And at times you hear from the murderer and it seems like they are telling you who the murderer is, so well done.

The chapters go back and fourth from His/Jack and Hers/Anna, a divorced couple that are faced to liaise with each other as they are also on the same murder case, whom they happen to also know.  Each chapter reveals a little about each character without pointing the finger specifically at one.  As the story starts from a traumatic incident involving teenagers and this incident then comes up for Anna, as the reader you dislike so many of the characters and believe no wonder revenge is involved but still who is the murderer.

This story involves brutal murder, bullying, cheating, lots of secrets, dementia and as a warning, animal cruelty.  (a very small part but for animal lovers, cats specifically, it would be sad for you possibly)

The less I say, the better.  I highly recommend.  I was right with my suspicion but the author definitely took me away from my thought numerous times.  I was really pleased with the ending as nothing was rushed.  I look forward to looking up other works by Alice Feeney, this was well done.

There is an energy that connects us together, flowing through us like electricity.  We are all just light bulbs. Some shine brighter than others, some show us the way when we are lost.  Others are a little too dull to be of any real use or interest.  Some burn out. (page 234)