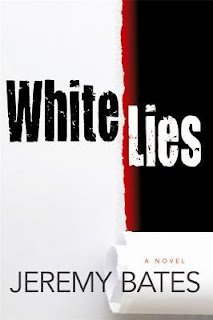 While driving to a charming village tucked away deep in the Cascade Mountains of eastern Washington, where she is to begin a new job teaching high school English, Katrina Burton picks up a young hitchhiker who turns out to be drunk and predatory. Fearful for her safety, she lies about her destination in order to get him out of the car. But when she later discovers that he is a teacher at the same school, she finds herself feeding that initial lie with more lies.

Then Katrina meets a mysterious man. Handsome, charismatic and strong, he is exactly what she needs to extricate her from the expanding network of lies, now spinning out of control. She falls fast and hard for him.

Her perfect solution, however, soon becomes a nightmare that lands her in the middle of a grisly murder. And Katrina’s problems don’t stop there. She must decide whether to betray her new love or to cover up the murder and hope for the best…until she discovers that the choice may not be hers to make.


My Review - 4 Great to the last Drop

A simple innocent lie meets professional lies ending with murder.  This was a thrilling novel, fast paced edge of your seat build up, pace is a strong point of Jeremy Bates.  For those that enjoy Adult Fiction but want to try a Thriller go for this.

My main issue is the hitchhiking, who the hell still picks up hitchhikers this day in age.  I am sorry, completely unbelievable which made me have the oh whatever feel while reading.  And then it is Katrina's first day on the job and she realises Zach, the man she picked up will be her colleague.  I was able to suspend belief and enjoy the circumstances that became thrilling and mysterious.  Why the hitchhiker issue is big, seriously, it is a dark and stormy night........ really.  Ok I am done with my vent but that took away a whole star rating.  I cannot handle complete utter foolishness.

I wanted to like Katrina, but with every lie on top of another it just became this silly game of cat and mouse.  I got the feeling Zach and her would end up together because they took to much time being concerned with each other and trying to have one up over the other. I'm not complaining this was entertaining to say the least.

Katrina then meets dark and handsome Jack and she is smitten, never using her head correctly and gets caught up.  I then begin to realise they are both compulsive liars, she is remorseful but he totally gets the thrill of living on the edge.

We are compounded with lies and then murder.  Instead of getting cops involved there are more lies to cover it up which of course leads to more murders and everyone is at risk and also scared to death of Jack.

You will not like any characters, you will think they are all fools and to think majority are suppose to be professionals, teachers, omg, what a scary thought but seriously you can only laugh at this.

After reading my review it may seem I didn't enjoy it but I did, after suspending my belief of course.  The fast pace, thrill sold me, I was engaged.  If your in the mood for a smoking hot book full of lies, give it a try.  I can see White Lies on the big screen and be enjoyed by many.

About the author, Jeremy Bates


Jeremy Bates has spent the last ten years traveling the world, visiting more than thirty countries. He has lived in Canada, the United States, Australia, Japan, South Korea, and the Philippines.
Bates is a graduate of the University of Western Ontario with a degree in English literature and philosophy. He is a member of Mystery Writers of America, International Thriller Writers, Inc, and Crime Writers of Canada.
His frightening debut novel, White Lies, is set in a small village in the Cascade Mountain range of eastern Washington. In the book, he succeeds in bringing world-class terror to this tranquil community.
To find out more please visit http://jeremybatesbooks.com


This was a review request. Thank you to Tracee, Virtual Assistant from Pump up Your Book