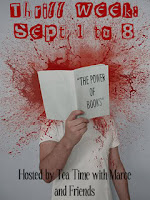 Giveaway
Amanda Stevens has agreed to give 1 of her books to you.  It is your choice, if you haven't started the trilogy, start from the beginning.
Leave your choice and email in the comments
Open internationally
Ends, Sat, Sept 8
﻿ 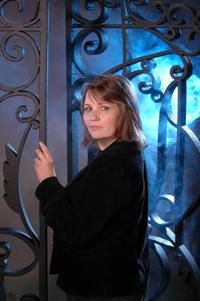 I think your covers are eye catching; I especially like that they tie in with each other.  What is your usual response when you see the cover and how involved are you with the process?
I literally gasped when I saw the first cover.  I thought it hauntingly beautiful, and I say that without fear of sounding boastful because ALL the credit goes to the art department. They’ve done an amazing job branding the series and capturing the mood and atmosphere of the stories.  I’m so thrilled with their interpretation.

With MIRA, I don’t have a ton of input.  I fill out art fact sheets that provide basic information regarding theme, tone, setting, characters and so forth, and I also create a mood board, which gives a more visual representation.  That’s it for my part.  I see nothing until the cover is pretty much finished.


You bring atmospheres to life, do you have a muse, music, specific setting etc that helps you create these scenes?

Thank you!  I’ve never been very good at explaining my process, but I think it once again boils down to being a visual person.  Certain scenes unfold in my head much like watching a movie. All the details are there, I just have to pay attention.  But I also spend a lot of time on word choice and sentence structure to help paint that picture.

And, yes, music can be very inspiring.  For this series, I listen to Fever Ray (The Wolf), Röyksopp (Across the Graveyard), The Raveonettes (Apparitions), Shamrain (To Leave) and Dulce Sky (I Dreamt of You).


Other than the Graveyard Series, What is your favourite book you have written?
The Dollmaker.  Those characters still haunt me.


Who are a few of your favourite authors?  Recommend a book to my followers that you think is a must read.


Must reads for me include anything by Dean Koontz, Charlaine Harris and David Lindsey.  Currently, I’m reading Abraham Lincoln: Vampire Hunter by Seth Grahame-Smith.  I’m late to the party on this one as the movie is already out, but I really love the story.  Such a cool premise.


Do you have a story about a cemetery or pictures you can share with us that has inspired you along this journey?

I grew up in an old house situated between two graveyards.  One was well-maintained and still active while the other had been abandoned for decades. The latter was a very creepy place, the sunken graves and crumbling headstones shrouded in brambles and infested with rattlesnakes and spiders.  I often conjure an image of that old forgotten graveyard when I’m writing about Amelia.

Do you believe in ghosts? (smile)
I don’t not believe in them, which is why out of all the paranormal creatures—vampires, werewolves, demons and so on—ghosts scare me the most.

How do you deal with social networking, bloggers, interaction with fans etc?

I’m addicted to social networking.  Seriously, interacting with readers, bloggers and other writers is so much fun for me that I have to be careful my writing doesn’t take a backseat.  I try to limit my time to evenings and weekends, but I’m not always that disciplined.


What do you like to do when you are not writing?
Like most writers, I’m an avid reader, but I’m also a huge TV junkie.  I love finding a series streaming on Netflix so that I can watch one episode after another.  Recently, I’ve gone through five seasons of Mad Men, four seasons of Breaking Bad, two seasons of Downton Abbey, Season Five of True Blood, all of the Vampire Diaries, Pretty Little Liars and Apparitions, and now I’m impatiently awaiting the DVD release of Dexter Season Six.  Did I mention that I’m a TV junkie?


Are there any ‘secrets’ you can tell us about the upcoming 4th book and the last in the Graveyard Series?
Soooo many secrets will be coming to light.  Both Amelia and Devlin are hiding things so look for some shaky times ahead in their relationship. The ‘sightless’ ghost from The Prophet is back to haunt Amelia in Book Four, and in Book Six, she’ll make a return visit to Asher Falls.  Other than that, my lips are sealed. ;)


Oh, did you mean writing?  I hope to have a Graveyard Queen novella up the first part of next year which will delve more deeply into Devlin’s back story and his secrets.  Again, look to my blog for updates. :)

Thank you so much for taking the time to liaise with me and do this interview.  I can't wait for more in the Graveyard Series and I will be picking up Dollmaker also.

I wish you continued success.

My Reviews
The Abandoned
The Restorer
The Kingdom
The Prophet
If you have reviewed Amanda Steven's books, feel free to link up here.