Review - I See You by Clare Mackintosh 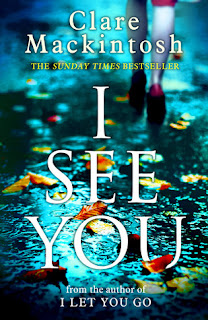 Every morning and evening, Zoe Walker takes the same route to the train station, waits at a certain place on the platform, finds her favorite spot in the car, never suspecting that someone is watching her...

It all starts with a classified ad. During her commute home one night, while glancing through her local paper, Zoe sees her own face staring back at her; a grainy photo along with a phone number and a listing for a website called FindTheOne.com.

Other women begin appearing in the same ad, a different one every day, and Zoe realizes they’ve become the victims of increasingly violent crimes—including murder. With the help of a determined cop, she uncovers the ad’s twisted purpose...A discovery that turns her paranoia into full-blown panic. Zoe is sure that someone close to her has set her up as the next target.

And now that man on the train—the one smiling at Zoe from across the car—could be more than just a friendly stranger. He could be someone who has deliberately chosen her and is ready to make his next move…

I read I Let You Go last year and really enjoyed it so I looked forward to this one.  It was a unique idea, revenge at its finest but not the edge of your seat or with excitement as the other. I read a little every day but it didn't pull me away from social media or tv with the family.  This was for an online book club which helped.

I wasn't able to guess who, no one made sense which I thought was a great sign.  Who the author tried to make a suspect, I never considered but Zoe did which was a shocker for me.  As soon as she suspected him I knew she made a deadly choice and wowsa did she ever.  Even once we realize what is going on something says this is not the whole story and I was right.  Really great ending with an additional bonus added, well done to Clare Mackintosh.

There was betrayal all around and I liked looking back and reflecting on that but I didn't understand the story lines and were they were going.  This is why I think I only gave a 3 1/2, the execution could have made me really think what is going on and think about everyone as a suspect.  Zoe surely did, but she was truly paranoid which I understood.

I really enjoyed the commentary from the perpetrator, this in my opinion, made the book exciting, making you want to guess who is behind the madness.

If anyone commutes and is a creature of routine, I am sure after reading this book, that will change but I also think having similar faces even though strangers gives a certain level of comfort too.  Overall a good read, I look forward to reading more by Clare Mackintosh.  This definitely is not a book you will read on the train, wink wink. 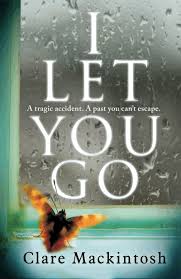