Review - The Silence that Speaks by Andrea Kane 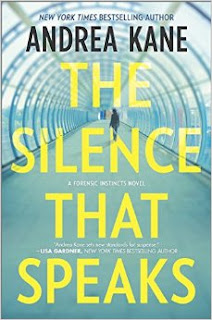 Forensic Instincts' first order of business is to find out who's targeting their client. Under the leadership of Casey Woods, the investigative team has the resources to do that, working inside the law—and outside it. FI's strength is its members, among them Casey's associate Marc Devereaux, former Navy SEAL and a man who's equal to any situation.

Except maybe this one…

Madeline's case hits too close to home for Marc. She's the only woman he ever loved, and she's his only weakness. Madeline feels the same way about him. Now a nurse at Manhattan Memorial, she's terrified because someone is trying to kill her. So she turns, reluctantly, to Marc and FI for help and protection.

Meanwhile, Manhattan Memorial is in turmoil. With a merger in the works, the staff is still haunted by their hospital administrator's sudden death—during heart surgery performed by Madeline's ex-husband, Conrad. A surgery at which Madeline was present. The death was assumed by some to be accidental, and by others, Conrad's intentional doing. The killer seems to blame both Madeline and Conrad…

With a growing list of suspects—from the grieving widow, to a long string of scorned lovers, to professional enemies of Madeline and Conrad's—Forensic Instincts will have to figure out who has the greatest incentive to get rid of Madeline in order to protect a deadly secret… whatever that secret may be. And FI has to work fast to save her—before she's permanently silenced.

The Forensic Instincts team is my favourite to read about, Andrea Kane always makes me want to join them and during the reading journey you feel like you are. The team consists of a Behaviorist, a former Navy Seal, a technowizard, an intuitive, retired FBI agent, human scent-evidence dog and the computer intelligence system, Yoda, all led by the leader Casey.  In this story we meet a new young lady interviewing to be part of the team as an assistant and she is put to work as her assessment immediately.

The story takes place in a hospital setting which was interesting as I work at a hospital and could imagine the dynamics of the characters.  High strung, mysterious, God-like attitudes, the staff that has been there forever is liked by everyone and knows all too.  Very interesting concept on the team using their skills to find out confidential information to break their case.  Forensic Instincts always get what they want but technology is holding them back this time, manipulating friendships becomes the new strategy.

A Chief passed during operation and now the Surgeon and wife are being threatened and sued.  Madeline ask for FI protection and to confirm that the surgery was not murder.  So much emotion and passion around healthcare but sometimes emotions take over integrity but for who is the question.

Madeline had history with Mark, a team member on FI and this history becomes a conflict of interest putting both of them in harms way.  Once we figure out who the killer is you have a moment of feeling sorry for them vs integrity of healthcare workers vs emotion, technology and medicine.

I love Andrea Kane's writing and the Forensic Instincts team and for this it gets a 4 but it was the least favourite in the series so far.  Seemed like it took longer than necessary, missed the intensity it usually has but I am still a fan.

The series does not have to be read in order but the building of characters of the team is a nice continuous touch.  She gives you enough to remember the characters without it feeling repetitive.

Thanks to NetGalley for another great read.