Review - The Sadness of the Samurai by Victor Del Arbol 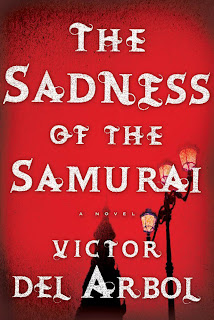 A betrayal and a murder in pro-Nazi Spain spark a struggle for power that grips a family for generations in this sweeping historical thriller.

When Isabel, a Spanish aristocrat living in the pro-Nazi Spain of 1941, becomes involved in a plot to kill her Fascist husband, she finds herself betrayed by her mysterious lover. The effects of her betrayal play out in a violent struggle for power in both family and government over three generations, intertwining her story with that of a young lawyer named Maria forty years later. During the attempted Fascist coup of 1981, Maria is accused of plotting the prison escape of a man she successfully prosecuted for murder. As Maria's and Isabel's narratives unfold they encircle each other, creating a page-turning literary thriller firmly rooted in history.
Show More
Show Less

I was intrigued as I started reading, each chapter taking on a different generation which you know will all come together toward the end.  Historical fiction isn't a genre that I read so I was happy to read this for a challenge and while reading realised it was full of suspense.

I appreciated when the story included meanings of the Samurai, the art work of the sword, the meaning, what it means to wound someone and when, its mandate, this was very well done, keeping you in tuned to the title of the novel.

I do think for those that love suspense would think this thriller was a bit convoluted, the execution of it was done in a way to make it more complicated and throw it off but it actually turned me off, it became a touch boring for me.  Instead of feeling the excitement of getting to the end to see how it all comes together, I just couldn't wait for it to end.

There are numerous killings and betrayal which kept the story exciting, in the end it just didn't fully work for me.  A 40 year tragedy, all the heartache, the murders, the family history and how the finale ended, I expected more of a explosive ending, some readers may feel it was.  A great story about hate and revenge and being patient enough to win, if it is to cover up actions or to reveal them.

I thought this was good, not completely my cup of tea but I can see many others enjoying the intricate weaving of the stories. If you are intrigued I say go for it.

Some favourite quotes - this book definitely has some amazing quotes

"You read the novel.  If you don't like it, burn it... And if you do like it, burn it anyway.  But that won't change things.  I know who you are, and I know what's inside you, waiting to awaken."

Waiting is the only thing you have left when you are unwilling to give up.  Hatred needs patience to become a useful emotion.

This weapon represents the best values of the warrior: bravery, loyalty, fierceness, elegance, precision, and power, but at the same time the worst as well:  death, pain, suffering, murderous insanity.

"All my life I wanted to be honest.  I thought that if I armed myself with principles, if I made an effort and put order into my actions, I would manage to live a good life.  But everything that forms the basis of my existence is false.  It's like finding out that you yourself are a lied.  I failed, and I don't even know who I am, or who I wanted to be.  I feel lost, filled with confusion and pain.  And I have no answers."

Thank you to the Publicist for sending me this one for my honest review.  I am putting this towards my Eclectic Reading Challenge.