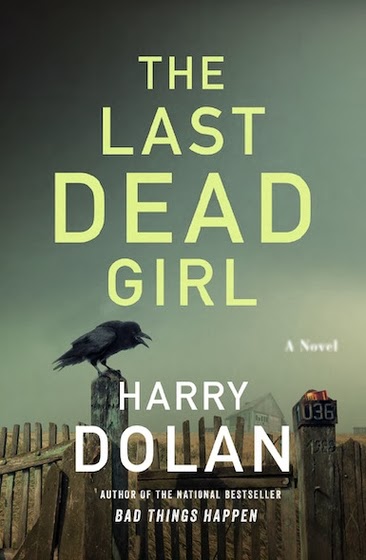 On a rainy night in April, a chance encounter on a lonely road draws David into a romance with Jana Fletcher, a beautiful young law student. Jana is an enigma: living in a run-down apartment and sporting a bruise on her cheek that she refuses to explain. David would like to know her secrets, but he lets them lie—until it’s too late.

When Jana is brutally murdered, the police consider David a prime suspect. But as he sets out to uncover the truth about Jana, he begins to realize he’s treading a very dangerous path—and that her killer is watching every move he makes.

I was pleased to see Harry Dolan releasing a new one with the character David.  His debut, Bad Things Happen was 5 star for me, I still think it needs to be read by many more around the blogosphere.  The Last Dead Girl is a prequel, giving us a look into the younger version of David.  You can start with either book, not necessary to read in order. My favourite part is the sarcastic dark humor David has, makes me want to meet and hang out with him.

David is a go with the wind kind of guy, no care in the world but very curious.  This curiosity with no filter makes him a man others are unsure how to take, mysterious. "I don't know.  But I have a theory."  "I don't doubt it," he said.  "Even when you have nothing else, you have theories.  Why don't you lay it out for me.'  (56% on Kindle)  He really should become a cop or Detective, he gets right in the middle of an investigation, putting himself at risk and becoming a suspect.  He is charming to woman while also being a guys guy.

I enjoyed trying to figure out the mystery but saying to myself it is to obvious, then it turns not into a who dunnit but given the answer and trying to understand why.  A great thriller making you want to read late into the night.

Harry Dolan has this quiet way of amazing me, I really enjoy his writing and feel delighted at the end.