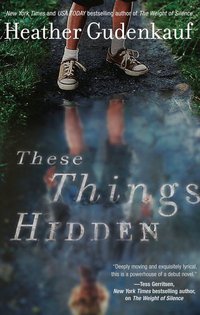 Book Summary from Amazon - Releasing February 1, 2010
Allison Glenn tried to hide what happened that night...and failed. The consequence? Five years in prison. Now she's free. But secrets have a way of keeping you caged...When Allison is sent to prison for a heinous crime, she leaves behind her reputation as Linden Falls' golden girl forever. Her parents deny the existence of their once-perfect child. Her former friends exult in her downfall. Her sister, Brynn, faces the whispered rumours every day in the hallways of their small Iowa high school. It's Brynn - shy, quiet Brynn - who carries the burden of what really happened that night. All she wants is to forget Allison and the past that haunts her. But then Allison is released, and is more determined than ever to speak with her sister. Now their legacy of secrets is focused on one little boy. And if the truth is revealed, the consequences will be unimaginable for the adoptive mother who loves him, the girl who tried to protect him and the two sisters who hold the key to all that is hidden.

I enjoy the style that Heather G has used again and hope she sticks to it, writing her story through multiple characters.  Even though I love this style I do not think this one was as strong as her debut book, at times I felt the distinction in voice wasn't there and I enjoyed the Librarian character but at times was confused by her age, is she young is she old, but I found a few characters to have that 'old soul' personality.

For me this read like a YA book, which is not my favourite, it could have had more emotional depth but half way the author drops a shocking jaw dropping punch and you just have to read until the end.  The rhythm of the book was great from then.

This teaser sentence is the essence of the book - A new start, a new beginning.  A new life.  These Things Hidden is the perfect title, there are many secrets hidden that you can't wait to find out.  Sometimes hidden you didn't know they existed. The consequences of the hidden secrets, depending on the eye of the beholder were all very different.

My favourite character was Charm, just the name alone was touching and meaningful.

The Weight of Silence was HeatherG's debut and I gave it 5 stars, it was a favourite of mine last year.

Here is another review. from Zia's blog, I got really excited after reading her great review and couldn't wait to read Heather's new release, thank you to her Publisher for allowing me to receive it through NetGalley.


Thanks for visiting Tea Time with Marce
Posted by Marce at 5:02 PM