Teaser Tuesdays is a weekly bookish meme, hosted by MizB of Should Be Reading. Anyone can play along!

Just do the following to participate:
Grab your current read
Open to a random page
Share two (2) 'teaser' sentences from somewhere on that page
BE CAREFUL NOT TO INCLUDE SPOILERS!
Share the title &; author, too, so that other TT participants can add the book to their TBR Lists if they like your teasers! 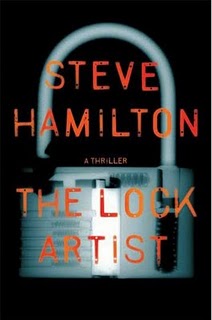 The Lock Artist is the 2011 Edgar Award winner for Best Novel.
Teaser from 6% on Kindle
The sick feeling I had been living with...the living, breathing fear I had been feeling, every second of every day... it was all gone.  Every bit of it.  At least temporarily.  For those next few minutes, when I did what I did next.
Book Summary
Michael is no ordinary young man.  Mute since a childhood tragedy, at age eighteen he discovers that he possesses a skill he would never have expected.  Whether it’s a locked door without a key, a padlock with no combination, or even an eight-hundred pound safe . . . he can open them all.
blank
It’s a talent that will make Michael a hot commodity with the wrong people, and whether he likes it or not, push him closer to a life of crime.  Until one day, when he finally sees his chance to escape, and decides to risk everything to return home to the only person he ever loved, and to unlock the secret that has kept him silent for so long.
I look forward to your teaser choice.  Have a great week.
Posted by Marce at 11:33 PM