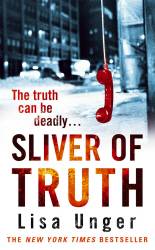 Ridley Jones is on a mission to find a ghost from her past . . . a very deadly ghost.
In Beautiful Lies, Ridley Jones stepped off a street corner and into an abyss of violence, deception, and fear. She is being a lot more careful about where she steps and trying to get on with her life when another seemingly mundane act—picking up a few envelopes of prints at a photo lab—puts her at the nexus of a global network of crime. A shadowy figure of a man appears in almost every picture she’s taken in the last year, lurking just far enough away to make identification impossible. Everyone from the federal government to the criminal underworld wants to know who the man is, but the only thing Ridley knows for sure is that she has to get to the truth about herself and her past if she’s ever going to find her way home.

A great continuation in a series that you should read soon after because many details can have you (me, lol) completely confused, in the end I remembered some but think I would have enjoyed even more if I had read sooner.  Beautiful Lies was more like Deadly Lies and Sliver of Truth was the line between innocence, naivety or to know the truth you must die.  Great thrillers, I highly recommend.

My favourite style was the chapter parts - Daddy's Girl, The Ghost and The Homecoming.

Ridley has moved on after the disaster of finding out who she is and family history that almost breaks her.  She is still with Jake, her boyfriend who gives mixed signals, we should move on or just enough to keep her engaged with her past.  She is feeling balanced and then is pulled off the street by detectives and shown pictures of someone they state is her father but her father is dead.

Everyone is asking her where is the ghost.  It becomes a chase against time but why are they chasing a ghost?  Another detective continues being in her life, does she trust him or is he the ghost they are chasing thinking it is her dad.  Lots of action and mystery to keep you thrilled.

Lisa Unger continued with the second person narrative, she executes this style perfectly, draws you in, making it more personal.

I look forward to reading more Lisa Unger, I won't wait as long as I did this time.  Any recommendations?