ARC Review - The Stranger You Know by Andrea Kane 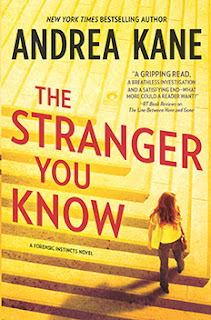 
College-age girls with long red hair. Brutally murdered, they're posed like victims in a film noir. Each crime scene is eerily similar to the twisted fantasy of a serial offender now serving thirty years to life— a criminal brought to justice with the help of Forensic Instincts.

Call. Kill. Repeat. But the similarities are more than one psychopath's desire to outdo another. As more red-headed victims are added to the body count, it becomes clear that each one has been chosen because of a unique connection to Casey— a connection that grows closer and closer to her.

Now the Forensic Instincts team must race to uncover the identity of a serial killer before his ever-tightening circle of death closes in on Casey as the ultimate target.

As the stalker methodically moves in on his prey, his actions make one thing clear: he knows everything about Casey. And Casey realizes that this psychopathic won't stop until he makes sure she's dead.

The Forensic Instincts team is by far my favourite detective group, yes they are unorthodox and sometimes use research tactics and get their answers illegally BUT to save lives, that is ok, right.......  They consists of a behaviorist, a techno-wizard, an intuitive and a former navy SEAL. If you watch the TV show Scandal, you will love these books.

Andrea Kane is one of my favourite suspense writers, I enjoy the characters and even if I guess some of the case there are always critical points I miss and are completely a surprise when revealed.

I enjoy this series because you can pick up any book and read as a stand alone but for the fans the building of relationships within the team and FBI connects and takes it to the next level, you become attached to the characters.

Andrea Kane takes you on a thrill ride during the investigation, you will be on the edge of your seat as the team have to keep up or more lives will be lost.  This time the FI team know the killer's ultimate plan is Casey, their leader, and they are doing everything it takes to find him but the killer is always a step ahead of them and starts taunting Casey with telephone calls.  Is it a copy cat killer or is the killer being directed from an ex murderer that is locked up?

I did think for a moment, why this, did Andrea Kane make a mistake, hmmm, keep reading.  I got caught up in the story and forgot about my glimmer thought which in the end was the answer.  I love that, like a true crime story, that thought in the back of your head may actually break the case.

I do think the end was a little to clean.  Also, I can't believe her team would fall right into the killers plan but it just shows when tragedy happens all thoughts can be compromised when to close.

Another great story, I am loving being caught up with all of her new books and slowly catching up on her older.  I recommend you try her.

The Girl Who Disappeared Twice
The Line Between Here and Gone