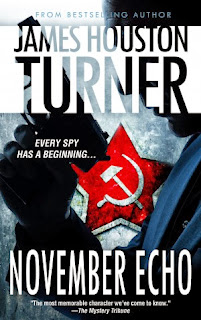 Every spy has a beginning, and for Colonel Aleksandr Talanov of the KGB, that moment occurs one summery night in 1985 on the Costa del Sol, at the height of Cold War tensions between the Americans and Soviets.

As a signatory to the Biological Weapons Treaty of 1972, the United States had already destroyed its military stockpiles of weaponized pathogens. The Soviet Union, however, responded differently to the signing of that treaty. They created a network of forty-seven top-secret production facilities spread across Russia. Called Biopreparat, it was the largest biological weapons program in history.

The only survivor is their teenage daughter, Noya -- short for Noyabŕ -- in English, "November" -- and what happens in an impulsive moment changes the course of Talanov's life by placing him in a desperate race to save Noya from the deadliest and most vicious adversary he will ever encounter: the KGB.

Talanov is one of my favourite characters of all time, intense with a brilliant mind, top notch spy for sure.  This was action packed as his other two books in this series, Department Thirteen and Greco's Game.  Espionage thriller at its best.

I respect James Turner more for always have strong female characters in his books also.  Sophia is Talanov's partner during an undercover job and she wants to prove to Talanov that she is just as good as he is.  The banter between the two is fierce and entertaining.

Every book gives us another side of Talanov.  I was such a fan when I was introduced to him in Department Thirteen, in November Echo we get to see the beginning of Talanov's life and getting into KGB.

These books are similar to Mission Impossible, Bourne Identity types, the perfect gift for men readers.  My only issue with all the stories is Talanov and others seem to have 9 lives, a few impossible moments in my opinion.

As I have said, I am a Talanov fan, very easy to cheer for and love.  At first I wasn't happy with him during this journey, he came across as a pompous ass where I always thought he was humble but superior in every way before.

I will have to recommend to start with Department Thirteen, brilliant from beginning to end.