Review - I've Got You Under My Skin by Mary Higgins Clark 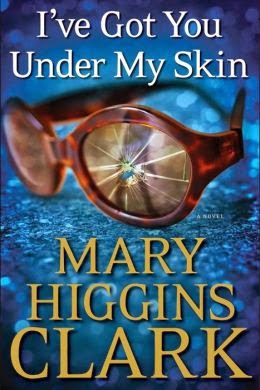 When Laurie Moran's husband was brutally murdered, only three-year-old Timmy saw the face of his father's killer.  Five years later his piercing blue eyes still haunt Timmy's dreams.  Laurie is haunted by more - the killer's threat to her son as he fled the scene:  "Tell your mother she's next, then it's your turn..."

Now Laurie is dealing with murder again, this time as the producer of a true-crime, cold-case television show.  The series will launch with the twenty-year-old unsolved murder of Betsy Powell.  Betsy, a socialite, was found suffocated in her bed after a gala celebrating the graduation of her daughter and three friends.  The sensational murder was news nationwide.  Reopening the case in its lavish setting and with the cooperation of the surviving guests that night, Laurie is sure to have a hit on her hands.  But when the estranged friends begin filming, it becomes clear each is hiding secrets... small and large.

And a pair of blue eyes is watching events unfold, too....

I love Mary Higgins Clark, her books turned me into a Mystery lover, so I am a fan for life.  As I was reading this one it reminded me of another book, Agatha Christie's Hercule Poirot's Christmas, which I highly recommend.

A daughters mother is murdered during a Graduate Gala for her and four friends.  They live for 20 years as suspects as the murder was not solved.  All coming together to clear their name.

Laurie, a TV producer has an idea to do a reality show, Unsolved Crimes and bring everyone together to reenact parts of the weekend.  All of them had reasons to dislike the mother, Betsy, and were hiding secrets that can pinpoint them as the murderer but was have to figure out who.

I was able to figure out the murderer, it was fun to be right but I do prefer to be surprised.

There was an underlying mystery also going on.  Laurie's husband was murdered in front of their 3 year old boy and he remembered him as "Blue Eyes killed my dad".  Blue Eyes told the child your mom is next and then you.  They lived in fear and Blue Eyes has decided to use the reality show filming as his next strike on the family.

I enjoyed this one, not as intricate as others and details repeated but the last 30% I was on the edge of my seat and read late into the night for the ending.  I love the games and blackmailing going on with the genuine hate instead of grieving, this made the story entertaining.