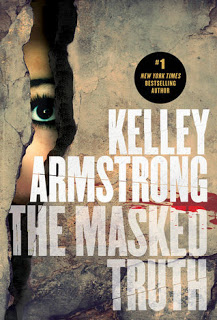 Riley Vasquez is haunted by the brutal murder of the couple she was babysitting for.  Max Cross is suffering under the shadow of a life-altering diagnosis he doesn't dare reveal.
The last thing either of them wants is to spend a weekend away at a therapy camp alongside five other teens with "issues." But that's exactly where they are when three masked men burst in to take the group hostage.
The building has no windows. The exits are sealed shut. Their phones are gone. And their captors are on a killing spree.
Riley and Max know that if they can't get out, they'll be next--but they're about to discover that even escape doesn't equal freedom.﻿
Published October 2015
My Review - 4
I saw this book  on a few Top Ten lists and thought I would try it.  I haven't read a Kelley Armstrong book before so I didn't know what to expect.  A thriller, yes, it had me on the edge of my seat at times, completely engaged.  I am not a YA fan and didn't realize it was but the author did a great job in my favourite genre of choice, thriller.  A great way to end the year of reading.
The book started with a BAM and I couldn't think how is this going to be executed, obviously it is way more to it than the summary, the thrill starts early.
Riley is babysitting when killers come in and murder the child's parents.  She is now going to therapy to deal with the anxiety, survivors guilt they also call it.  She then goes to an overnight camp for a few teenagers to do joint therapy.  Well before they get started masked men come in to overtake the therapy session as a hostage overnighter, it all turns deadly, bloody, scary, quickly with everyone running around an old building for survival.  Max, another teenager grabs hold of Riley and forces her to run with him.
Teenagers in therapy now watching each other get injured and dying, really feels like a mind game of madness, how could some be going through this kind of thing again. Max has found a way to calm himself, he is a little bit of a wordsmith.  Always has words in his head, coming up with their meanings.
Gregarious: fond of company.  Convivial: cheerful and friendly; jovial.
Gregarious but not too convivial.  Yes, there was a difference.
Max realized this also distracted him from focusing and making him wonder if he is in control of his thoughts or not.  I am not sure if it is because I do not read YA often but I loved Max and Riley.  They become partners to watch over each other.  They reminded me of Hazel and Augustus in the Fault in Our Stars by John Green.  Just something special about them.
You are only half way done in the book it looks like a glimmer of hope and then the whole book changes.  Who is the unreliable character, Riley or Max or is the author manipulating you to think the way she wants you to.  Brilliant execution, really well done, I didn't know where she was going with the story but I can't say anymore but the Masked Truth is revealed.  A remarkable thriller, I wish it was an adult thriller but not a deal breaker.  I enjoyed the ending overall also, not all tidy, real life.
Happy New Year Bloggers,
here is to an amazing 2016 year of books for us to read and share.
Posted by Marce at 4:58 PM