The Scapegoat by Daphne duMaurier 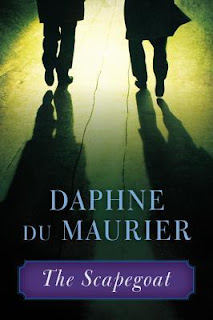 By chance, John and Jean - one English, the other French - meet in a provincial railway station.  Their resemblance to each other is uncanny, and they spend the next few hours talking and drinking - until at last John falls into a drunken stupor.  It's to be his last carefree moment, for when he wakes, Jean has stolen his identity and disappeared.  So the Englishman steps into the Frenchman's shoes, and faces a variety of perplexing roles - as owner of a chateau, director of a failing business, head of a fractious family, and master of nothing.

Gripping and complex. The Scapegoat is a masterful exploration of doubling and identity, and of the dark side of the self.

Daphne duMaurier is definitely an artist of writing.  Her book Rebecca is in my top 3 of all times, it is a must read, recommend to all, there is something for all lovers of books to enjoy.  The Scapegoat would be my third book by her.  This one had more of a Agatha Christie feel to it at times.

Imagine walking in a place and stopping short seeing yourself, I had to think is he drunk, imagining things, having a mental break or is there really a twin in the world for everyone.  I enjoyed trying to decide throughout the book which it was. I guess it is easy to trust the face of yourself  and decide to spend an evening with each other but what happens when one of you steals the others identity?  Now it gets interesting....

The Englishman decides to explore the double life but he didn't know what he was in for.  The resemblance is so great, his own family doesn't realize the difference except the family dog.

It seemed to me now that I wanted Jean de Gue' to have been a different sort of man.  I did not want to discover at each step that he was worthless.

Going along with this escapade we had the delight of him giving gifts to all from his trip.  Only an initial to assist who to give them to.  Of course giving gifts would be a fun, beautiful moment but no sarcasm and bold betrayal at the highest degree.  His daughter advised against giving them at the dinner table together but he didn't listen.  What a funny but most inappropriate uncomfortable scene.  I'm sure the true Jean would have enjoyed being a fly on the wall.

So much family history, betrayal and sadness, the modern word would be drama.  No wonder he wanted to escape but it seems he bought it onto himself.

Even when you look alike their is still a personality style and you cannot pretend to be who you are not.  His way helped to rebuild what the true Jean had broken.  The story takes place over a week and it is a courageous story.  It gave both man another chance, looking for the meaning of life but who learned the most or is it a story of split personality......... you decide.

Initially it may seem you have to choose to believe but it is a play with the mind story that will have you thinking.  Daphne du Maurier has a way of taking you back to her world, you can picture the scenes without the long descriptions, she is a master of suspense.

My other reviews of Daphne du Maurier