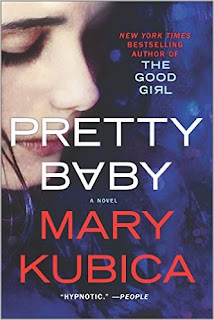 Heidi Wood has always been a charitable woman. Still, her husband and daughter are horrified when Heidi returns home one day with a young woman named Willow and her four-month-old baby in tow. Disheveled and apparently homeless, this girl could be a criminal—or worse. Nevertheless, Heidi invites Willow and the baby to take refuge in their home, despite her family's objections. As clues into Willow's past begin to surface, Heidi is forced to decide how far she's willing to go to help a stranger. What starts as an act of kindness quickly spirals into an unrelenting web of lies and a story far more twisted than anyone could have anticipated.

Mary Kubica is releasing a new book out in May.  I enjoyed her debut book and think they were both solid reads but some growth still needed with the author. After noticing her new one releases soon I also realized I didn't review Pretty Baby and I read it last year, so just a mini review from what I remember.

I think Mary Kubica will become known as a formula writer which I can appreciate.  When you go to your favourite restaurant you know what you are getting, you cherish the time and food.  This is my appeal with her books so far, I see the execution and think she does it well, I really think she will be an author that captures long standing fans.

The story was told by a multiple of narrators which I love, it allows you to become more engaged with the characters and to see another side to the story.

I enjoyed Willow's story, being in the right place at the right time finally, maybe.  She was an orphan and those stories were sad but with a glimmer of hope, we meet Matthew who was also an orphan, helping her to escape.  We get to see revealed secrets of Willow and the baby which make the story in the end.

Heidi is on a train and sees Willow in the cold with her baby.  After a few sightings she decides to bring Willow and the baby home, yes this really happened.  Is she a charitable advocate or a little crazy, I will say both.  I don't know how her husband allowed this but I think it was his own way of trying to help Heidi but also he was a busy business men.  They also had a teenager daughter, who the heck would make this decision, bringing in a broken teenager with a baby when you already have a teenager at the peak of hormonal moodiness.  The husband continued to say I'm calling the police, maybe he should have as this baby scene, homeless teenager became unbelievable.

Uncomfortable, sometimes shocking but overall an emotional mysterious read.  I recommend trying a book by Mary Kubica.   The new one sounds so good.  I look forward to reading and seeing further growth with the author.

Thanks to Netgalley for allowing me to read this one.  I read it before release date and never reviewed it.  Last year was a write off.  I will not repeat last years book reading decisions.