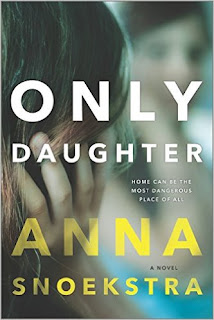 
In 2003, sixteen-year-old Rebecca Winter disappeared.
She'd been enjoying her summer break: working at a fast-food restaurant, crushing on an older boy and shoplifting with her best friend. Mysteriously ominous things began to happen—a presence in her room at night, periods of blackouts, a feeling of being watched—though Bec remained oblivious of what was to come.
Eleven years later she is replaced.
A young woman, desperate after being arrested, claims to be the decade-missing Bec.
Soon the impostor is living Bec's life. Sleeping in her bed. Hugging her mother and father. Learning her best friends' names. Playing with her little brothers.
But Bec's welcoming family and enthusiastic friends are not quite as they seem. As the impostor dodges the detective investigating her case, she begins to delve into the life of the real Bec Winter—and soon realizes that whoever took Bec is still at large, and that she is in imminent danger.

Only Daughter is the debut book by Anna Snoekstra from Australia.  I see huge potential with this author's writing in the psychological thriller genre.  This is a story about what is done in the dark will come out in the light and that family deep rooted secrets will come out and have you hurt all over again.

A young woman is arrested and instead of facing her consequences she remembers an old police story where she looked like the victim and says she was abducted and that her name is Bec Winter.  How shocking and ridiculous is this lie but she gets away with it, or does she......  'Surely, a mother would know her only daughter.'  Kindle 11%

The story felt a little farfetched to start with coincidence after coincidence and then you realize the story may not be about her replacing Bec's life but finding out where Bec disappeared.  The officer in charge is disappointed she won't help him find who took her and starts to think she is protecting someone, but who?  Bec has no idea what she has started all over again with her new family and friends.  Instead of living the life with a beautiful reunion she ends up with guilt and continuous stress on tricking her new family and getting the cops to give up on the investigation.

The story switches between 2003 before Bec goes missing and 2014 when she is replaced.  I thought this was a solid story keeping you engaged but it missed the thrill and the highs and lows that keep you on the edge of your seat.  You knew something was off with the mom and dad but never exactly what, so many of the secrets were not fleshed out because the characters were one dimensional. You know the mom is conflicted but there is no growth to understand why.  Then there is the best friend's father, weird things are said and done in the past and present but never comes to intuition, you just have this feeling that is never revealed.

I enjoyed the ending but it could have been longer to answer some questions.  The text messages she was receiving added a great potential threat and edge of your seat thrill but never was fully captured to be thrilling and a true threat.  'Get Out' and 'Leave now or it will happen again.'   This execution was a miss and could have taken the book to another level but great debut overall.

Thanks to Netgalley for pre-approving Only Daughter for me to review.