Review - The Murder That Never Was by Andrea Kane 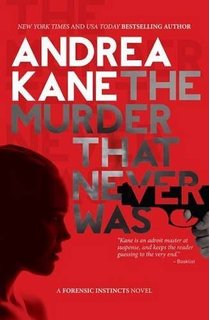 Given the opportunity, would you assume someone else's identity and leave your old life behind? A serendipitous crossing of paths between Lisa Barnes, a down-on-her-luck job seeker, and Julie Forman, a personal trainer to an Olympic hopeful, forever changes the course of both women's lives. One winds up dead and the other finds herself a fugitive, hiding behind one lie after another as a cold-blooded killer methodically hunts her. Desperately trying to stay alive, the terrified woman enlists the help of Forensic Instincts, a rogue investigative team that clandestinely operates in the gray area between legal and illegal. Safeguarding their client's deception, Forensic Instincts digs into dangerous territory as they try to find out who's after their client—and why. Meanwhile, bodies are piling up in Chicago, New Jersey, and Vermont as a megalomaniacal genius will stop at nothing to eradicate anyone who threatens the success of his medical breakthrough. With an unhinged client and a monstrous criminal enterprise as its adversary, Forensic Instincts is forced into uncharted territory to protect their client and save one of their own from becoming the next corpse. Forensic Instincts is an unorthodox, criminal investigative team that carefully navigates the fine line between legal and illegal. The team consists of a behaviorist, a former Navy SEAL, a techo-wiz, an intuitive, a pickpocket, a retired FBI agent, and a human scent evidence dog.

The Forensic Instinct team can do no wrong, absolutely love these characters.  Andrea Kane makes me feel at home and her writing immediately grabs me and I'm in the comfort of m book journey with this team, I am one of them....

I really enjoy the fact that all the cases are so different and then a race against the clock, these kind of suspense thrillers I live for.  The FI team live by there own rules to help the innocent, very unorthodox but you love them all.  The banter between them is great, sarcastic, funny, professional, an overall refreshing edgy group.

We meet Lisa who becomes FI new client.  Finally her life is moving in the right direction and then she sees her look alike get killed.  She makes a run for it but changes identity in hopes that her past will now be buried.  Well the fear of her past doesn't compare to the fear she will have against the murderers which are high up on the Russian Organized Crime groups.

The new member of the team Emma, sees an article and immediately has connection with Lisa due to her past life.  Her colleagues does a little investigating and soon realizes Lisa and her friend Miles are in danger and need their help.

Organized Crime is very scary, talk about brutal with no feelings.  They will do whatever it takes to keep their boss happy and his research secret.  Innocent people involved in research that becomes a matter of life or death.

I highly recommend this series but you should read in order.  Andrea Kane does a fascinating job at building the characters, moving along the personal storylines while keeping you on the edge of your seat with the case of each book.  It brings a genuine touch to the stories as you really start to care for the team.  I think it is great execution with the balance of description, dialogue, plot and interesting characters.

I highly recommend this series