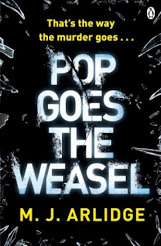 A man’s body is found in an empty house.
A gruesome memento of his murder is sent to his wife and children.He is the first victim, and Detective Helen Grace knows he will not be the last. But why would a happily married man be this far from home in the dead of night?The media call it Jack the Ripper in reverse: a serial killer preying on family men who lead hidden double lives.Helen can sense the fury behind the murders. But what she cannot possibly predict is how volatile this killer is—or what is waiting for her at the end of the chase....

I really loved book one, Eeny Meeny and thought I would have read this one sooner but I was a little disappointed.  I may be tired of the prostitute getting revenge story but it seemed like it took forever to invest the reader.  The first book was edge of your seat worthy and this one I had to force myself to read until it got exciting near the end.

Another issue I had was some of the revelations are not powerful, I didn't figure it out which was good but it came so late and with an emotional shocking fact.  The book was almost over by then.  Readers need more then just murders, this lacked excitement.  I couldn't wait to understand why the female was killing men and when it was revealed, oh my goodness, I felt like crying, traumatic experience.

I like Detective Helen Grace but she ends up with the short end of the stick again with awful bosses who do not respect her intelligence and style.  Book two went into other relationships that make Helen who she is and the spin was that the a journalist found out everything she worked hard to keep secret and continued to blackmail her.  Many would enjoy this story line but the journalist annoyed me so this didn't work well.  You should read this series in order, the author is taking her time with developing Helen and slowly giving us more.

I think the average person trust detectives and their specialty but they are real people that sometimes gets distracted and when it comes together, the reader could be disappointed in the overall investigation. There was a lot of consequences of emotions from book one.

I did have issues, not writing execution issues just not great detective work to be honest.  Almost towards the end it became exciting, heartbreaking, almost edge of seat worthy which is why it almost got a 4 star rating.  Book one was so great I feel I need to give the series another chance.