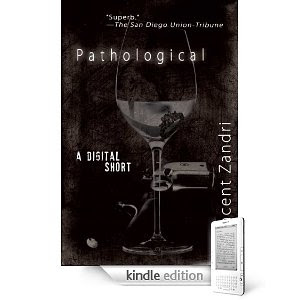 The serial killer takes on many guises. But what happens when you unknowingly take him as your most trusted and loyal husband?


Pathological is proof that even though you think you know your spouse inside and out, you might not really know him at all.

This is the first of many Digital Shorts from Vincent Zandri.   I first heard of him from Cheryl at CMash blog

I had no idea what a Digital Short was but I said let me see what the 1st chapter is about and I read the whole thing, only 7 chapters.  I definitely look forward to reading Vincent Zandri's books, his writing gripped me from the beginning and didn't let go.

Call me parasite.
Call my father-in-law the necessary evil.  Or just plain call him ugly.
But please allow me to correct myself.
Ugly is not my father-in-law yet.  But if all goes according to plan he will be dead by sundown tomorrow evening. Also, he's not really all that ugly and I'm not sure about the evil part either.  He's only ugly and evil when he's angry.  And right now, he's seething.

Are you hooked yet?  I downloaded on my Kindle for 89c

So I downloaded The Remains by him, look forward to reading this one now that I know his writing style is for me. 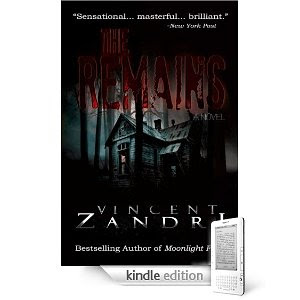 Thirty years ago, teenager Rebecca Underhill and her twin sister Molly were abducted by a man who lived in a house in the woods behind their upstate New York farm. They were held inside that house for three horrifying hours, until making their daring escape.


Vowing to keep their terrifying experience a secret in order to protect their mother and father, the girls tried to put the past behind them. And when their attacker was hunted down by police and sent to prison, they believed he was as good as dead.

Now, it’s 30 years later, and with Molly having passed away from cancer, Rebecca, a painter and art teacher, is left alone to bear the burden of a secret that has only gotten heavier and more painful with each passing year.

But when Rebecca begins receiving some strange anonymous text messages, she begins to realize that the monster who attacked her all those years ago is not dead after all. He’s back, and this time, he wants to do more than just haunt her. He wants her dead.

Thanks for visiting Tea Time with Marce
Posted by Marce at 10:43 PM