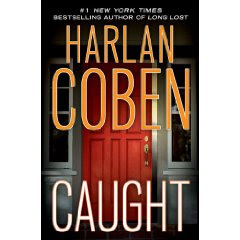 This week's pre-publication "can't-wait-to-read" selection is:
Caught by Harlan Coben
Published Date - March 2010
Summary
Wendy is a reporter on a mission: She's chasing down the lowest of the low-sexual predators-and exposing them on national television. Her big break comes when she nails a child advocate who works with abused and underserved children. She's there, cameras rolling, when the cops cuff him and the guy realizes his life is well and truly over. Three months later, the perp is off the grid, missing and presumed dead after the father of a victim claims to have killed him. Wendy, proud to have taken the man down in front of a shocked television audience, has moved on to the story of a missing girl, Erin, in a nearby suburb. The whole country is obsessed with finding this child, and Wendy should be well on her way to journalistic superstardom. Then is all comes unhinged: Wendy gets a phone call that changes everything. A group of local fathers, out of work and not above vigilante justice, begins to take matters into their own hands on Erin's behalf. Secrets long-buried rise to the surface and Wendy begins to wonder if her assumptions that fateful night three months ago were based on solid investigative journalism-or if she has unwittingly been part of a grand manipulation aiming to destroy and innocent man.
Please leave a comment and participate over on Jill's Blog - Breaking the Spine
http://breakingthespine.blogspot.com/2008/09/waiting-on-wednesday_17.html
Posted by Marce at 10:45 AM