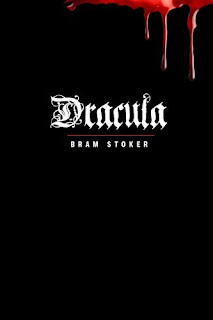 A naive young Englishman travels to Transylvania to do business with a client, Count Dracula. After showing his true and terrifying colors, Dracula boards a ship for England in search of new, fresh blood. Unexplained disasters begin to occur in the streets of London before the mystery and the evil doer are finally put to rest. Told in a series of news reports from eyewitness observers to writers of personal diaries, this has a ring of believability that counterbalances nicely with Dracula's too-macabre-to-be-true exploits.

Let me start by saying, yaaaaay, I completed Dracula.  This was not an easy task, at times I felt like I was torturing myself.

Dracula is a book for those that love classics, historical stories and fans of vampire books that want to know where it all started. This story made me feel like it was riddles and the mystery was figuring out what the riddle meant.

Dracula is told through letters, journals and memos.  The beginning was creepy and I was fascinated.  Jonathan is my favourite character and he had me completely drawn in.  I felt like I was floating and then dropped out of the sky.  The story took a direction that didn't make sense, bad flow, I was bored, put Dracula down and considered it a DNF.  A week later I decided to try again.  It was brutal but I got half way in and started to appreciate it again.

I enjoyed the hunt.  The group of men and Mina trying to figure the Count Dracula out with scientific and realistic data was interesting.  Determined to hunt him down and kill him.  The creepy unexpected way the Dracula was around but you only knew after, that was done very well.  The first confrontation with the Dracula made me catch my breath.

Once they were on their way to find Count Dracula this began to bore me again, far too much, almost as if Bram Stoker was keeping us in suspense, but it was overdone.  And the ending, blah in my opinion.

Another book I am happy I read so I can add to conversations but I am not impressed and will not recommend.

I read this for the RIP Challenge and I realised it also goes for the Book Blogger Recommendations Challenge.