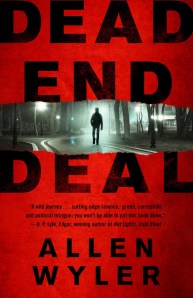 Book Summary (not an exciting summary)World renowned neurosurgeon Jon Ritter is on the verge of a medical breakthrough that will change the world. His groundbreaking surgical treatment, using transplanted non-human stem cells, is set to eradicate the scourge of Alzheimer’s disease and give hope to millions. But when the procedure is slated for testing, it all comes to an abrupt and terrifying halt. Ritter’s colleague is gunned down and Ritter himself is threatened by a radical anti-abortion group that not only claims responsibility, but promises more of the same.


Faced with a dangerous reality but determined to succeed, Ritter turns to his long-time colleague, corporate biotech CEO Richard Stillman, for help. Together, they conspire to conduct a clandestine clinical trial in Seoul, Korea. But the danger is more determined, and more lethal, than Ritter could have imagined.
A smart, unique, page-turner, Dead End Deal delivers

My Review - 4 Great to the last Drop

Great fast paced thriller.  This was a run for your life before getting "Locked Up Abroad" thriller.  Allen Wyler is a Neurosurgeon turned author and it comes across with a genuine feel of medical details while still keeping the reader engaged and on the edge of their seats.  The main character Jon is also a Neurosurgeon so we get true technical details.

Jon has been doing research for ten years, waiting to test in order to find a cure for Alzheimer's.  A personal decision as his grandmother died with Alzheimer's.  After receiving the grant, then it being pulled from under him he couldn't accept 10 years being for naught and found a way to continue.  This decision almost cost him his life.

The beginning of the book was a good setup of characters and manipulation.  Almost exactly half way the run for his life began and wow, what a race until the end of the book.  Who can you trust?  I did think Jon should have figured out who was behind it all but when it is a matter of life and death how can you think straight.  I enjoyed the fact that everyone thought they were in control not realising continuous obstacles.

This thriller was more about the race from Korea back to US without being caught and killed by the man trailing him.  The research and surgeries were the background story.

I definitely recommend this one.  I look forward to reading more from Allen Wyler.

Thank you to Anna, Associate Publicist from www.BlueDotLiterary.com for sending me this review copy for my honest review, I truly enjoyed the thrill.